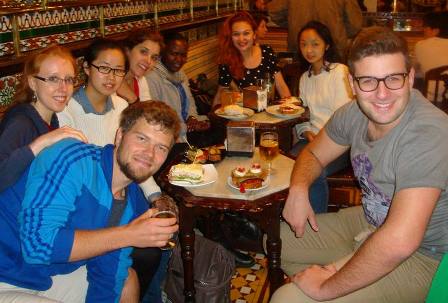 Last Monday, in one of our schools in Bilbao, we said goodbye (or better, see you soon) to two students who had studied Spanish for six months, Wiebke and Jane. They both started the same week and have learnt side by side from their first day.

Elena, our student from Russia joined them a little later, along with Elisa and Virginia, our students from China. Later, Ingo from Germany joined the group, who after four months finished on Monday too, and Juan from France. Aoifa and Peggy from Ireland also attend the Spanish class sometimes, when their respective jobs allow. One of them started at A1 and they have finished at B1; a large advancement.

This group has experienced some great moments and they have fond memories of the classes and the of the schoolÂ´s extracurricular activities.

For both Elisa and Virginia, Wiebke was the first German girl they had ever met, and coming from China, they were surprised by her predisposition for learning and her perseverance. Both girls noted that Wiebke is a very sensitive girl who shares her ability to learn by knowing how to listen.

Ingo broke moulds in the Spanish class as, as one of the other students noted, âbefore meeting him I thought that all Germans are very punctualâ. We forgave him these little slips in punctuality because he entered with a grin from ear to ear that brightened the day and as another student said; âhis incredible eyesâ gained everyoneÂ´s forgiveness. This restless, travelling and exemplary guy, who, for example, according to Elisa âdoesnÂ´t break traffic rules in front of childrenâ, has managed to take the official English exams through the British Council and Spanish exams through Instituto Cervantes during his time at our school; a challenge.

Jane has provided some of our best experiences as Spanish teachers, this nun from Kenya has gained all of our love and affection each day. She arrived only speaking English, Swahili, and four other dialects from Kenya, but not a word of Spanish. She has been in a class with students of all ages and nationalities and it is definite that they all have a fond memory of her. She has been a great fighter, tenacious, hardworking, and kind-hearted.

We hope to see them all again soon and we thank them from here for making us better teachers.

We offer a selection of Spanish schools that offer great Spanish courses in Spain at reasonable price. Our Quality Spanish courses are accredited by Instituto Cervantes.