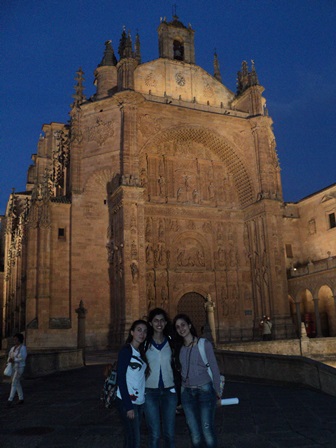 Three Cypriot interns explain to us how they combine their internships with tourism during the weekend, all the while practising their Spanish:

During our three month internship programme in Spain, we are combining our work duties with visits to different cities. It is a great way to relax after the work week and to get to know Spain better.

Last weekend we visited Salamanca, at first, we chose the city in order to explore the heart of the country.

Salamanca blew us away from the get go. It is a very pretty and picturesque city. The city is famous for the beautiful old town, where you can find the main monuments: la Catedral Vieja (the old cathedral), la Catedral Nueva (the new cathedral), la Casa de las Conchas (the house of shells), el Convento de San Esteban (St Estebanâs Convent), las Escuelas Mayores, etc. The old city is so important that it was declared a World Heritage Site.

We really liked the University of Salamanca, but we had no idea that it was the oldest in Spain.

We also visited the Plaza Mayor, which is known as the hub of social life of the city. The square was bustling with people of all ages: young people, students, tourists and locals. All around us were streer musicians performing classical and modern music and we thoroughly enjoyed the different kinds of street shows on offer. We could see that in Salamanca, the people found many ways to have fun, and above all, it surprised us how the locals could have fun without forgetting about their culture, and so wherever we were, music and dance were always present.

We had the opportunity of completely immersing ourselves in the Spanish culture, just like people our age, when we checked out the cityâs night clubs. We found the decor of these places to be truly amazing and we really enjoyed the live music.

From all the monuments we saw, the Casa de las Conchas and the two Cathedrals impressed us the most. To sum up, the ambiance of the city really struck us. It was cetainly very different from the mood in Bilbao.

We hope to explore more of Spain during these weekend getaways.

We are already thinking about our next stop: Tarragona for its beaches? Gijon for its harbour? Victoria for its famous potato dishes? ...

There is so much left to see!

We offer a selection of Spanish schools that offer great Spanish courses in Spain at reasonable price. Our Quality Spanish courses are accredited by Instituto Cervantes.